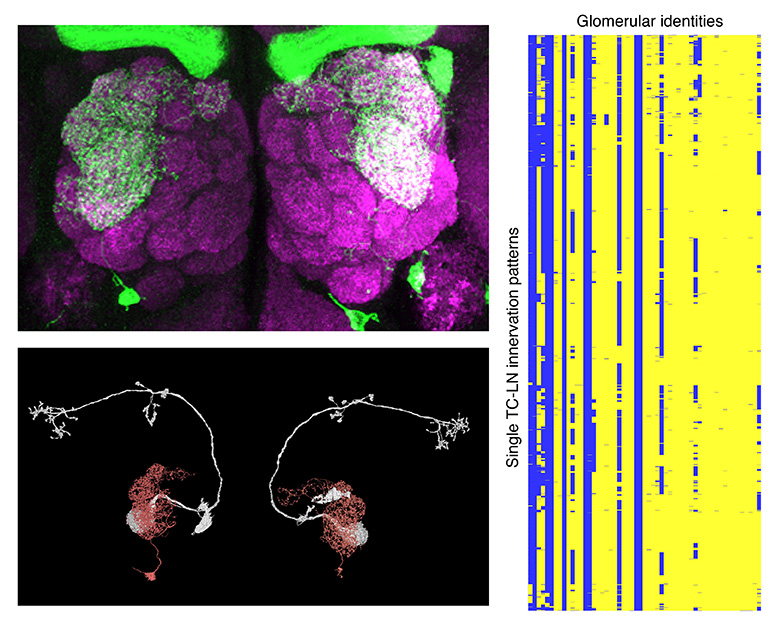 Variations in neuronal connectivity occur widely in nervous systems from invertebrates to mammals. Yet, it is unclear how neuronal variability originates, to what extent and at what timescales it exists, and what functional consequences it might carry. Using genetic labeling and electron microscopy connectomics, we show that an identified inhibitory olfactory local interneuron, TC-LN, exhibits extraordinary variability in its glomerular innervation patterns. TC-LN’s innervation of the VL2a glomerulus is sexually dimorphic, is influenced by female’s courtship experience, and correlates with food intake in mated females. Mating also affects output connectivity of TC-LN to specific local interneurons. We propose that mating-associated variability of TC-LNs regulates how food odor is interpreted by an inhibitory network to modulate feeding.

Variations in neuronal connectivity occur widely in nervous systems from invertebrates to mammals. Yet, it is unclear how neuronal variability originates, to what extent and at what time scales it exists, and what functional consequences it might carry. To assess inter- and intraindividual neuronal variability, it would be ideal to analyze the same identified neuron across different brain hemispheres and individuals. This is a big challenge to all current model organisms.

Recently, a research team led by Dr. Ya-Hui Chou, an Associate Research Fellow in the Institute of Cellular and Organismic Biology at Academia Sinica, built a genetic system to consistently label an identified olfactory local interneuron, TC-LN, in the Drosophila brain. With help from two international teams led by Drs. Gregory Jeffery (Cambridge University, U.K) and Liqun Luo (Stanford University, U.S.A), they used electron microscopy connectomics to further prove that there is only one TC-LN in each brain hemisphere.

With the system on hand, the team next collected and analyzed 3,300 TC-LNs from individuals of different ages, sexes, mating status and genetic backgrounds. Unexpectedly, this neuron exhibits extraordinary variability in its glomerular innervation patterns, with as many as 849 functionally distinct innervation patterns. This innervation variability is the combined result of developmental stochasticity and experience-dependent wiring. Specifically, the innervation patterns were sexually dimorphic and could be further driven by female courtship experience. Furthermore, the local connectivity of this neuron in female brains changes after mating, concomitant with a change in feeding patterns. Their observations also showed that the TC-LNs in two brain hemispheres can have different innervation patterns, thus revealing an unprecedented extent of intra- and interindividual variability for an identified neuron and suggest that local interneuron connectomes are highly dynamic.

This study offers conceptual advances for the morphological definition of cell types and the mapping of connectomes, as well as understanding how dynamic neural circuits contribute to animal behaviors. The team believes similar phenomena should also be exhibited in more complicated brains, like rodents and humans.

This work is supported by Academia Sinica and MOST, and is through the collaboration with Drs Gregory Jefferies (University of Cambridge, U.K.) and Liqun Luo (Stanford University, U.S.A.).