Monoclonal Antibodies against Nucleocapsid Protein of SARS-CoV-2 Variants for Detection of COVID-19｜Institute of Cellular and Organismic Biology, Academia Sinica 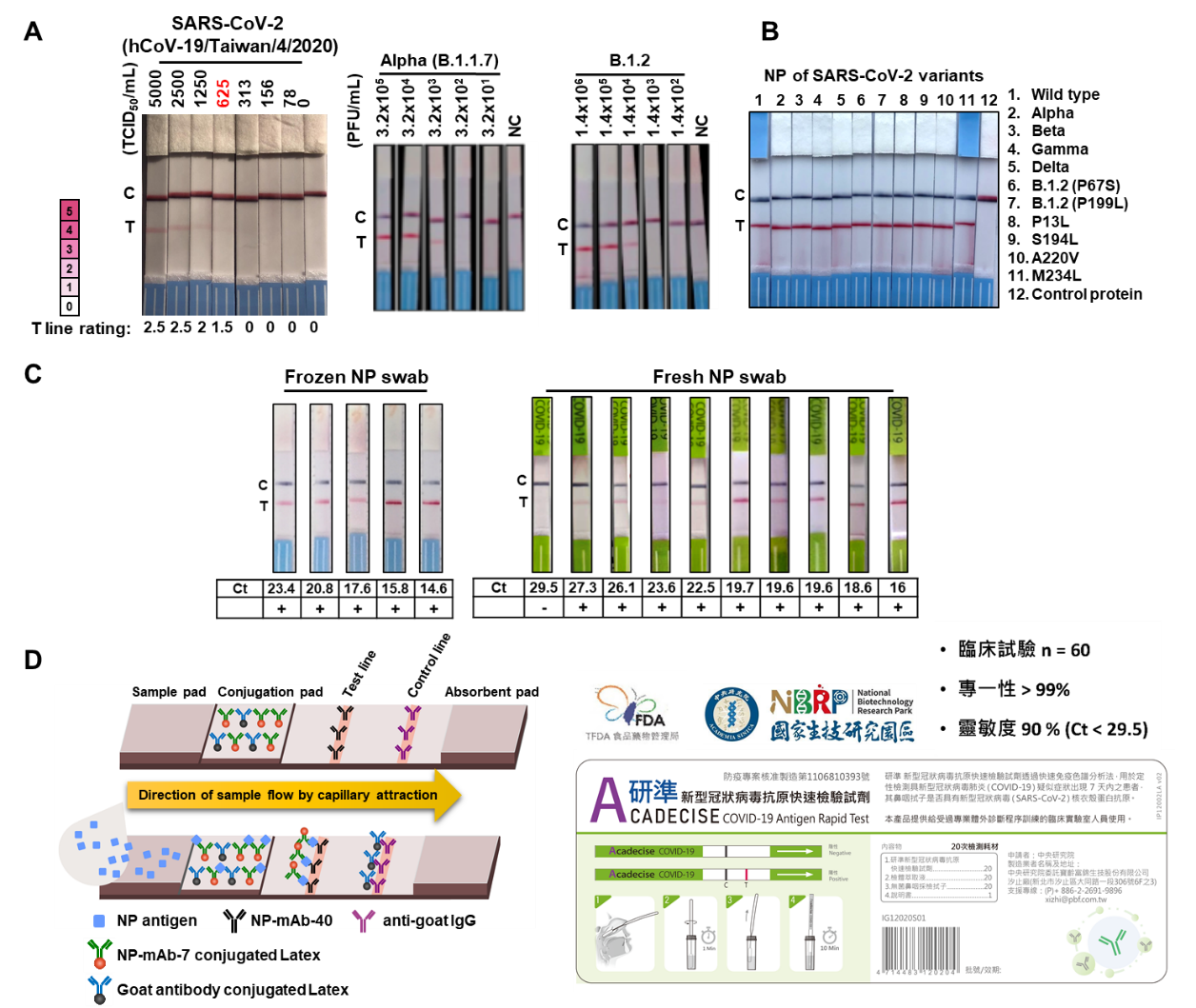 The SARS-CoV-2 genome has a high mutation rate, which has led to the emergence of new variants and a continual state of emergency around the world. In order to identify infected individuals and bring the outbreak under control, scientists aspire to develop useful detection kits.

A research team led by Dr. Han-Chung Wu, a distinguished research fellow at ICOB and the director of BioTReC, has recently developed a new lateral flow immunoassay (LFIA) SARS-CoV-2 rapid antigen test. This test can give results within 15 minutes, and no instruments are required to read the outcome. It is especially suitable for first-line screening and for use in areas with limited access to medical equipment, allowing medical staff to quickly screen for potential infections and prevent spread of the virus. Dr. Wu indicated that the antigen detected by the test, the nucleocapsid protein (NP) of SARS-CoV-2, is a highly conserved viral component with prominent immunogenic characteristics. To develop the LFIA, the team first generated monoclonal antibodies (mAbs) against SARS-CoV-2 NP using mouse hybridoma technology. Then, they performed a screen to find the best pair of antibodies (NP-mAb-7 and NP-mAb-40) for SARS-CoV-2 detection. Based on this antibody pair, the test is called NP-mAb-40/7 LFIA. To construct the LFIA, NP-mAb-7 is utilized as a capture antibody linked to latex nanoparticles that are deposited on a conjugation pad. Meanwhile, NP-mAb-40 is immobilized on the test line, where it serves as a detection antibody. NP-mAb-40/7 LFIA showed high performance against the original virus, as it was able to detect wild-type SARS-CoV-2 at 625 TCID50/mL. In addition, the NP-mAb-40/7 LFIA can detect several variants, including Alpha, B.1.2, Delta, and more than 10 less well-known mutants of NP.

The capture antibody, NP-mAb-7, recognizes the dimerization domain of NP, which has a low mutation rate. Hence, NP-mAb-40/7 LFIA shows great promise and potential for detection of broad-spectrum SARS-CoV-2 variants, as suggested by the lead authors of this paper, Assistant Research Scientist Dr. Ruei-Min Lu and Project Manager Dr. Shih-Han Ko in BioTReC. The specificity of the test for SARS-CoV-2 was confirmed, as NP-mAb-40/7 LFIA did not cross-react with five other human coronaviruses or 20 common human respiratory pathogens. In clinical tests, a total of 60 swabs were evaluated, 10 of which were SARS-CoV-2-positive according to RT-PCR (Ct: 16-29.5). For these samples, NP-mAb-40/7 LFIA had an overall detection accuracy of 98.3%, with 90% sensitivity and 100% specificity. Based on the data from this clinical study, NP-mAb-40/7 LFIA was granted Emergency Use Authorization (EUA) by TFDA on July 8, 2021, making it the first test from Academia Sinica to gain approval for use in the population (brand name: Acadecise COVID-19 antigen rapid test).

Notably, a different type of test, called a rapid serological antibody test, can be applied to characterize a patient’s infection history. These tests allow medical personnel to detect IgG and IgM against SARS-CoV-2 in the blood. Dr. Wu pointed out that the research team also began a cooperation with Tzu-Chi University at the beginning of the outbreak to develop serology tests for the detection of IgM and IgG against SARS-CoV-2. The test they developed was granted an EUA by TFDA on July 27, 2020. Up to now, 195,000 of these rapid serological antibody tests have been delivered to developing countries, such as Indonesia, Honduras, Bolivia, Dominican Republic, Saint Lucia, and Lesotho. The tests were distributed for the purpose of international humanitarian assistance and in the spirit of “Taiwan Is Helping”.